What your visitors are thinking right now - and why it matters 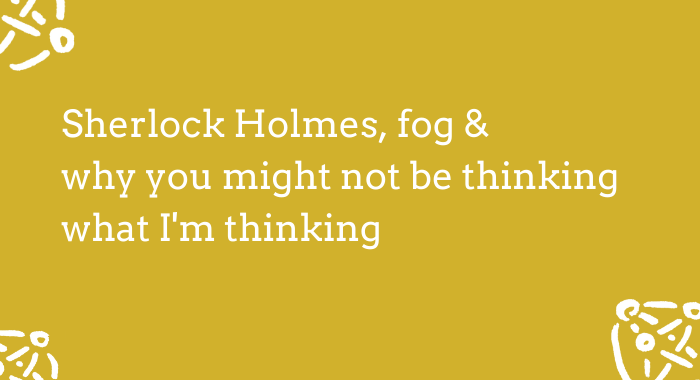 When VisitBritain first started to promote Britain to Chinese visitors, there was a problem. Chinese travellers were less interested in coming to Britain than other European countries. When Chinese people were asked to think about London and what they expected to see, they thought it might be foggy, perhaps even dirty. London was rarely thought to be as attractive as Paris. Why?

It turned out that the Chinese media had depicted London as foggy since Victorian times, drawing on descriptions in Sherlock Holmes books, stories by Charles Dickens and paintings by Claude Monet.

Once it became clear that this was a barrier to promotion, it was easier to find ways to promote London and Britain, showing images of places on a clear Spring day, or emphasising aspects of London that interested the first Chinese visitors such as shopping for famous brands.

We all have preconceptions, often formed without us even realising. Some of these make sense, some don't.

We assume everyone has the same insights and experiences. If we don't take a moment to understand how others view something, our marketing may fail.

If you live in the country, you're used to seeing green spaces.

If you live in a town, you're used to being able to nip out and buy something from the shops.

Both of these things seem obvious. But we don't always think about how our places or businesses are viewed by others.

For a long time people promoting the countryside showed photos of beautiful landscapes, assuming anyone who wanted to leave the city for a country break would be attracted by those images. Sometimes it worked. But not always...

Research showed that people who're not used to spending time in the countryside were sometimes slightly fearful of those photos of outdoor spaces. Of course, the fields looked beautiful but what was there to do? You say 'go for a walk' but where? How do you know where to go? A photo of a field with a clear footpath through it made a big difference.

Similar things happen when cities are promoted as 'full of things to do'. That's a selling point for some people. For others it's just daunting: we need clear starting points and just a few recommendations, not a long list.

Is there a chance you're making some assumptions about your visitors?

Is there something you perhaps think they like or want to do but maybe don't know about?

Do you need to differentiate more between first-time and repeat visitors? Or to stress some important but basic details?

There are no comments yet. Be the first one to leave a comment!