The power of micro-steps to achieve a bigger goal 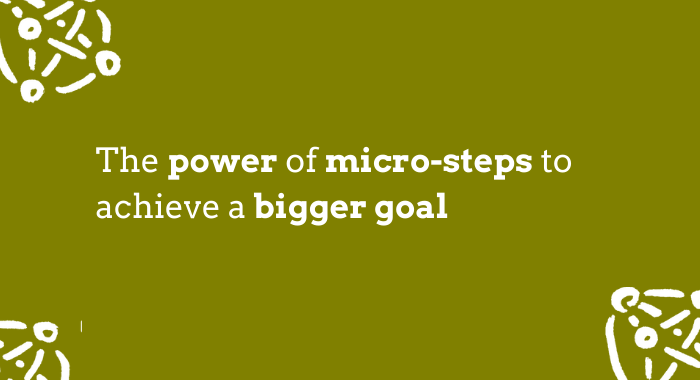 Ever feel some things are just too big to deal with?

You know it’s important but it just feels too big to tackle? Sometimes it’s something like redecorating – you know it needs doing but can’t face all the upheaval. Or you’ve got a new phone and know it’s got all kinds of clever functions but there’s never a good time to learn what to do. Climate change is a whole other level of daunting. What can one person do that’s ever going to make any difference?

Whatever the daunting challenge you’re facing, there is an easy way forward. I’ve tried it and it really works. Even better, it’s pretty painless!

The basic principle apparently comes from the Navy Seals but it’s applicable to any goal. I’ll give some less ‘hardcore’ examples and how anyone can use this technique in a moment.

The Navy Seals have to get through something called Hell Week, when they complete mental and physical challenges with only an hour of sleep each night. Some of the challenges are truly horrible and really test human endurance. So how do they face these horrors?

They’re taught a simple trick. They set themselves the huge goal of completing Hell Week but then don't focus on it.

They're taught not to think about activities such as running 200 miles carrying a boat on their head.

Instead they focus on achieving one small step at a time:

The principle is simple:

The power of this is that as you complete each small step, there’s a sense of achievement. After only a few micro-steps, it starts to feel like real progress. Motivation increases so you want to complete some more micro-steps.

Run for one minute right now

This approach is often used for sports. Tim Henman encouraged Emma Raducanu to focus on one point at a time. She won the US Open.

If you were just starting to think about running a mile, you might keep putting off the challenge. The Navy Seal approach would be:

It's really simple. And it works, so long as you actually do it.

Applying micro-goals for your business

So, what’s the daunting task you’ve not started yet?

Be clear about what it is. Then break it down into much smaller steps or micro-goals.

What’s the first thing you might need to do?

Could you set a date by which you’d like to complete it, so you have an additional motivation.

One of the reasons working on micro-steps works so well is the sense of achievement it gives. This in turn builds motivation and momentum. One simple recommendation to make this even stronger is to create a tick chart, so you can see the progress as each micro-goal is achieved. It might sound childish but it’s powerful. Most of the time we give ourselves a ‘to do’ list and beat ourselves up for not doing something, instead of celebrating each small achievement.

I'd be interested to know if you've tried this, or how you could use it for your business?

Your article reminds me of an old proverb I was taught many years ago as a young aspiring manager:

“How do you eat an elephant? One bite at a time!”