Surprise and delight to get more word of mouth publicity 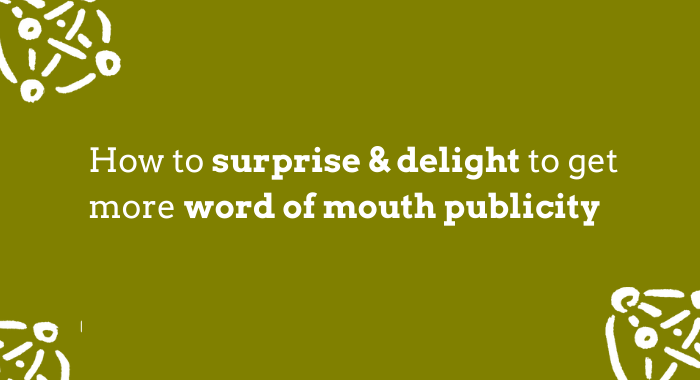 Ask any tourism business what's their most effective, lowest cost marketing method and they'll almost certainly answer 'word of mouth'. It's easy, it's free - and it 'just happens'. Or does it?

Most businesses just hope for word of mouth publicity and recommendations from satisfied customers. They do a good job, and hope word of mouth referrals will follow. Now we have 'word of mouth on steroids', in the form of social media so it's become even more important to impress.

Some businesses spend very little on any other marketing methods because they're perfected the art of 'surprise and delight'. There's an American restaurant that uses a very simple tool to encourage diners to talk about them - a joker card. Instead of allocating table numbers, diners are asked to choose a random card from a large deck and use that. If they draw a Joker card, their order is free of charge. When it happens, it creates quite a stir, with other diners celebrating with the winners. Naturally the winners share the story of good fortune with many others. This simple technique has ensured queues out of the door.

Many years ago when Richard Branson set out to create 'six star' hotels and resorts he needed something that differentiated them from other properties. Making people smile is an easy way to delight. Branson wanted to go beyond beautiful settings, and excellent service from friendly staff. How could he make his resorts really memorable? At the luxury level a new trouser press probably isn't going to differentiate one hotel from another.

So what was his way to surprise and delight? A rubber duck was placed in every bathroom. No one else did it, and it was bright and colourful enough to stand out. It acted as a 'talk trigger', something people talked about before going on to describe the other features that made for a good time. Google 'Richard Branson Rubber Ducks' and you'll see they've even become collectible items, for sale on ebay.

Years ago I had a client, Ian who ran a hotel in Kings Cross, London. At that time the area had a terrible reputation and many of the local hotels were badly run and often filthy. Ian wanted to differentiate his hotel from the others and ensured his hotel was scrupulously clean. It was a good idea, and many visitors returned again and again, but Ian wanted to take it a step further and find a way to stand out more. The trouble with telling people that your hotel is clean is that it's really just what's expected. How do people really know it's clean? Photos of gleaming surfaces on Ian's website just looked 'normal'. Instead he put on a mop cap, pinny, Marigold gloves and posed in every room with a feather duster or mop. The photos were eye-catching and made people smile. Bookings went up. To make people smile when they checked in, Ian also had a colourful display of his collection of fancy rubber gloves at reception. His hotel was by far the most popular in the area, and he was soon able to raise his rates.

Last Christmas I did a lot of online shopping. Most of the presents I ordered arrived on time and were what I expected. There was no reason, good or bad to talk about any of the businesses I bought from. Except one. That company still sticks out in my mind, because they did a very simple thing. I ordered some stationery and earrings from Oliver Bonas. They arrived quickly and with an unexpected addition - two Lindt chocolates. I still remember the nice surprise I got when I opened that particular package. And I've told a lot of people.

One of my clients had a hotel in an area of London where competition was really strong. There were many similar hotels with similar prices and services. We struggled to find an angle that would make her hotel different. She simply offered bed and breakfast in a fairly simple room, so the options felt very limited. Our light bulb moment came when we realised everyone also offered breakfast at similar times - from about 7.30 - 10. My client started to offer breakfast from 6.00 - 10 and publicised that fact. It was a small detail but worked amazingly well. Some visitors were jet-lagged and desperate for breakfast by 6, some wanted to start exploring as early as they could or be first in the queue at Madame Tussauds. They were always really pleased to be able to eat so early - and word of mouth publicity spread as a result.

You don't have to do anything major to surprise and delight. In fact it's often the small details that make the most difference. Outside a pub in Masham there's a tiny beer barrel with a tap and dish. It's marked 'dog rehydration station' and both drinkers and passers-by take and share photos of it.

You can influence visitors' minds even before they visit, by taking opportunities to build their anticipation. About two weeks before they arrive, I send my holiday cottage guests a long email with lots of local recommendations for things to do and places to go. It mentions local shops with information about their owners. Every guest says that they feel they know the area even before they get here, and look forward to meeting some of our local characters such as 'dancing Dave' the greengrocer. It's a small thing to do yet very effective.

Do you have a good way to surprise and delight your visitors? I'd love to hear about it?

This is not something that would work for everyone but I know there are different organisations on this group.  My son attends a woodland session in the holidays and after each block they post him a little card which has a picture of him enjoying their sessions.  This is a real wow and talked about on social media by all the parents.  Im sure this could be adapt to work for other organisations.